A trip to Ladakh - All spiritual serenity

I was watching a Bollywood movie named “Paap” and after eyeing the scenic landscapes of Ladakh, I was all driven to my solitude, my soul. Yes! I am a solitude seeker and spirituality thrives within me. The contrast of crimson(clothes of little monks) against the backdrop of ivory-white mountains were all feast for my eyes. The stillness of the azure sky sprouted more spirituality within me. The ringing bells of Monasteries, and pious prayers, and those colorful spiritual flags ignited my heart and soul and by the evening I had decided to plan my solo trip to Ladakh.

Spirituality is not only offering flowers to your deity, or presenting them with sweets and juicy fruits, or lighting Diyas and dhoops. At least not for me. Spirituality is all soulful and blissful. It is more about the discovery of yourself, your worth. Ladakh has been associated with challenging trekkings and bike ride tour. But, I was planning to explore some different things.

The great Himalayan range is a symbol of spirituality in itself. Spending time amid serene and pious Himalayan hills was quite an exhilarating experience and I was pretty sure I was going for a spiritual savior during my solo Ladakh trip.

Less of luggage and more of my thoughts

Just a backpack fulfilled my need and I was good to go. But, some research was required before heading for the journey. I went through more than 20-25 websites and looked out for every single detail required for my Ladakh tour package. All of these 20-25 sites were quite helpful for Leh Ladakh Tour Packages, but www.Go2ladakh.in was definitely above all of them. The site was flooded with information about Ladakh, the related geography, climate, weather conditions, the best time to go, and lots more.

But, I had planned not to go with any travel planners. Rather, I wanted to plan my travel on my own. So, I booked my train tickets from Delhi to Srinagar. Let me tell you one of my secrets, I am in love with train journeys. Maybe because of comfort, security, enjoyment, and sightseeing(peeping through the window panes of the train). This has been my childhood hobby. I still remember the quarrels with my siblings for capturing that window seat(so that I witness the beauty of green fields, rivers, forests, and busy cities).

After reaching Srinagar, I took a cab till Leh to ensure that I do not miss any of the gems of Mother nature. The cascading river with crystal clear water, the green pastures and barley fields, ruins of ancient forts and palaces, the route had all I wanted for the feast of my eyes. After reaching Leh town, I checked into the pre-booked hotel room.

As I was tired, I ended up in gorging upon the hearty breakfast and went to a sound sleep(a warm thanks to the great hospitality).


May the spiritual solace be with you 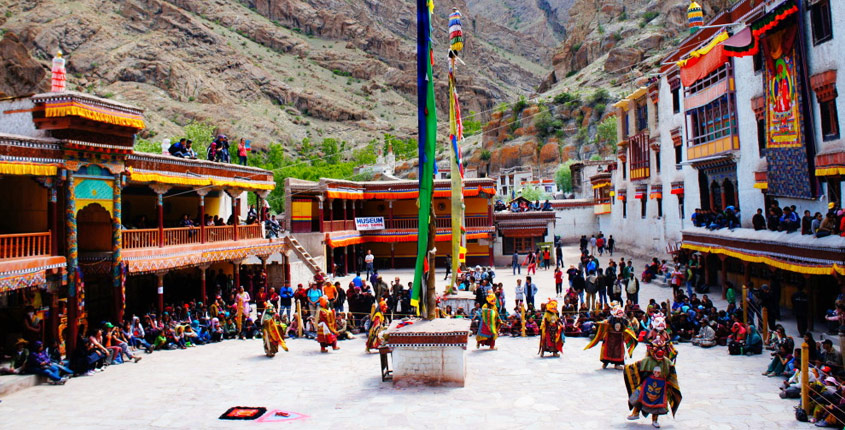 There are things which are more than intricacies and magnificence of ancient Buddhist Monasteries and Gompas. Not everyone can understand it. But, the spiritual solace and serenity which was emitted by these ancient architectures were supreme and part of Buddhist culture. I explored the tranquility of numerous Monasteries, Gompas, and white-domed Shanti Stupa.

I found Monasteries which whispered spiritual stories, ancient Gompas telecasting the tales of historical Buddhism, and much more. Gompas are meant for sheer seclusion and isolation from the world. They were designed in ancient times to provide a concealed space to the Buddhist monks so that they can practice Buddhism and deep meditation.

For a spiritual soul like me, it was a celestial land meant to provide eternal ecstasy. I wanted to explore all of the Monasteries for I didn’t want to slip any of the historical heritage. The crude and purest forms of the environment even gave land for a pure spiritual aroma. Snow-laden hills washed greenery, and pastures, crystal clear waters of the rivers and streams helped a lot in meditation.

Buddhism is the main religion followed in Ladakh. Although, it is a splendid mix of Tibetan, Chinese, and Indian Buddhism. I found surreal bliss for my soul as I joined the prayers of the monks being done at Hemis Monastery at the time when the sun was leaving for its abode. The praying folk included little monks who looked exceptionally serene and graceful in their crimson attire.

The moment made my heart sink in eternal peace. Later on, I even chanted mantras with the elderly monks for seeking static tranquility. Let me brief my visit to Diskit Monastery. Being one of the oldest monasteries, and cuddled well amidst the Nubra valley and craggy mountain ranges of the Himalayas, it is a religious abode.

The gigantic statue of Lord Budhha located on top of the Monastery adds a spark of spirituality to the scenic view of the Monastery. As I gazed through the huge statue of Maitra Buddha, I was lost somewhere in history. It may sound pretty more dramatic to you, but I felt a very strong nexus with the religion. I was wondering over my feelings which said I was part of this historic Buddhism.

I consulted one of the elderly monks of the Diskit Monastery and pleaded with him to guide me for meditation, mantra chanting, and prayers. I was pretty thankful as he nodded his head with a big “yes”. He revealed various realms of Buddhism to me and explained the procedure of meditation and prayers. He also disclosed the procedures for effective mantra chanting procedure. I followed him and found a completely new world inside me.

The magnificent mantra “Om-Ma-Ni-Pad-Me-Hum” was heard several times by me from a praying Tibetan Buddhist as I crossed other Gompas and Monasteries. I found it to be scribbled on mani walls outside the Gompas. This mantra consisted of six syllables symbolic of some relevant things of life, ignorance for the "om", anger for the "ma", miser for the "ni", attachment for the "pad", hatred for the "me", and arrogance for "hum". This powerful mantra does purification of these six aspects of the disciple.

Thangkas and Mandalas for my solace

Prayer rooms and Gompas consisted of Thangkas, a religious, royal painting, uncovering the teachings and scriptures of Buddhism. It made use of natural hues on a cotton canvas having serpentine borders of silk brocade. More than beauty, it was more of a spiritual significance as far as I gained my knowledge from the monks.

Mandals are symbolic, elaborated circular diagrams used effectively for tantric meditations in Hinduism as well. It can be created on a piece of cloth or paper, but Buddhist monks generally make sand Mandalas. Differently hued sand is used for completing the diagram and later on, the sand gets swept by air and filled in a jar. It is finally emptied in a water body as a symbol of the cycle of life, to seek a blessing for life.

Apart from spiritual surprises, I also indulged myself in Ladakhi cuisine which was simple yet sumptuous. I also hopped around the local markets to collect some artifacts and memoirs. I had also appreciated the allure of mountain passes and motorable roads as I was traveling in my taxi. Finally, I returned from Ladakh with a feeling of contentment. More than a vacation, it was a spiritual safari for me. I had brought bags full of wisdom, serenity, eternal bliss and cherishable memories for a lifetime.
Share With: