A dream which sparked a passion for Ladakh

Antique Monasteries, titanic copper bells, vivid thangka, bee-line of crimson-clad monks and prayer flags, I saw it all in the landscape of snow powdered craggy hills. With folded hands and closed eyes, I was sitting on a craggy piece of rock, feeling my soul melting inside me. I could clearly hear the chants of Buddhist mantras which kept me healing and pushing somewhere in history. Yes, I dreamt Ladakh. I still remember that Friday morning, I woke up with awe- infused lines on my forehead. My soul was not permitted to come out of my dreams, although it was all over. It was Friday, and not a weekend, which meant I had to rush through washroom, kitchen, bedroom, and then straight away to my workplace.

I did the same and reached office in no time. Though I was completing my assignments, I was traversing through a different world. The dream was still running in my mind. I was waiting eagerly for the evening and rushed out of my office once the clock showed 6 o’clock. Usual traffic felt palliating to me as the evening sun was leaving for its mansion. I felt so serene remembering my dream which had interlaced my soul last night.

After reaching home, something ignited inside me as I sipped my strong cappuccino. As my mind refused to forget the trails of my last night’s fantasy, I decided quickly to plan my much awaited Ladakh tour package. Suddenly, my base phone rang and broke the silence with optimum finesse.

“Hi, Shambhavi! What’s up? It’s been long we didn’t get your updates. How are you doing? Let’s catch up this Sunday.” “Wait! Let me speak, something is cooking in my mind. Are you coming to join me for a Ladakh trip?” Shambhavi said it all in one breath. “What? Ladakh! How come Ladakh? This is December and Ladakh would be freezing. Are you serious?” Chetna asked in anxiety. “Yes, I am damn serious and quite firm on the idea that I am going to explore Ladakh by next weekend. You know what? I had a dream last night wherein I was in Ladakh, meditating and inhaling the pristine air of mountains. I am going to live that dream in reality, for sure.”

The surreal safari
And finally, our trip was finalized and we booked our travel Package from Go2ladakh.in, which is an Oracle for Ladakh packages. I am not saying this blindly. Our team had researched a lot for travel companies and then finalized Go2ladakh for our Ladakh trip. Yes, we were a team of 5, Chetna accompanied us along with Rakesh, Sumit, and Lavanya. No, we were not college friends nor were we office colleagues. But we had spent full packed 2 years together as we were preparing for Medical Entrance Exams. Thus, each of us knew the strengths and weaknesses of everyone.

We had finalized for the train journey. Go2ladakh is a professionally run travel company and takes care of every bit of your journey. We had train tickets from Delhi to Srinagar, so we boarded the train very punctually. Train journeys are appreciated by writers and we had 3 of them with us. Rakesh and Chetna were writers, in fact pretty good writers than me. Gaping through the windows of the train, I got a myriad view infused with greens, browns, and whites. Enjoying homemade meals with friends was something which is unmatched in satisfaction and happiness.

We reached Srinagar in about 12 hours and left for our pre-booked hotel rooms. Go2ladakh team has shown optimum levels of hospitality to us. We were escorted very gracefully to the hotel rooms and offered with some fresh colorful flowers and a refreshing welcome drink. Hot steaming meals were stuffed in our tummies and we went off for sleeping in order to shed off our tiredness.

Next morning, we left for Leh town in a comfortable cab organized by Go2ladakh. We held our breath gazing through the mighty mountain ranges sprinkled with powdery snow. Ladakh has been very kind to the travelers and tourists and always present best of the scenic landscapes irrespective of the season. 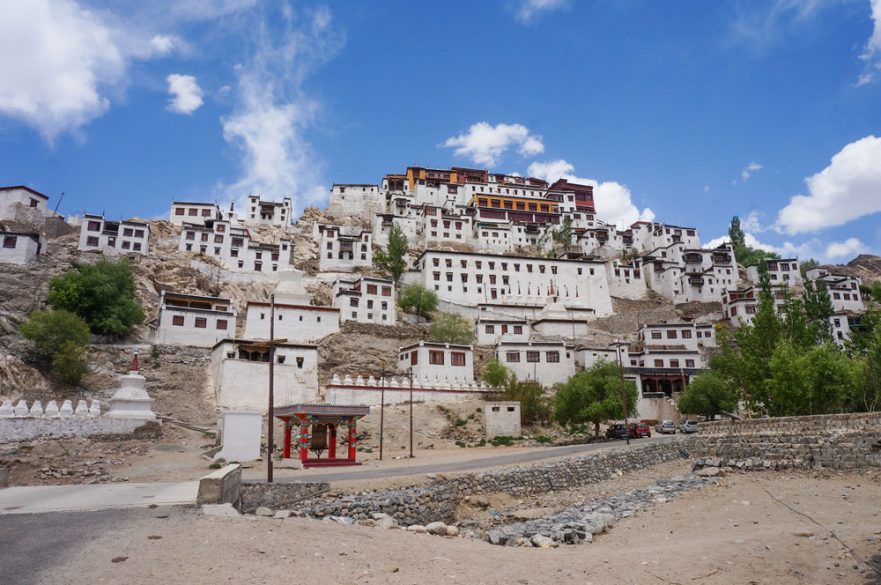 Monasteries standing with grace since ages
Ladakh has seen the dawn of Buddhism and roots are firmly spread here. You could see plenty of Monasteries and Gompas narrating the historic tale of Buddhism. I turn speechless upon witnessing the timeless allure of the Monasteries.

Spituk Monastery
We reached Spituk Monastery by crossing the Spituk Village. The splendid charm of the Monastery captivated our hearts. It is known to be built in the 11th century by Od-de, the older brother of Lha Lama Changchub. It is run by Gelugpa order. Earlier, it was run by Kadampa school(Red Hat Sect).

More than 100 Buddhist Monks live there and practice the spiritual themes of Buddhism. I found my soul go missing as I got the sight of a giant statue of Goddess Kali. Being a spiritual person, I had an inclination for spiritual feelings and felt heavenly after eyeing upon this statue. I was told that this idol is an ancient one and comes for public display only during the Spituk festival.

Shey Monastery
Initially, Shey was the capital of Ladakh. Shey Monastery is built inside the Shey Palace and it used to be a summer retreat for the royal family of Kings of Ladakh. World famed Shakyamuni Buddha made with gilded copper which is as tall as a 3-story building. Chetna shouted in anxiety, “Look! Such a huge wax bowl.” I saw the magnificent wax bowl which was burning and emitting light. It is known to be replaced every year and keeps on burning till then.

The enchanting beauty of murals and paintings, inspired by ancient Buddhism kept wandering in my eyes. Rakesh insisted to sit there for a while and we agreed for the same. With the help of Monks of the Monastery, we even tried the Buddhist style of Meditation which released oozes of silence and peace to our souls.

Diskit Monastery
Diskit Monastery was a true wonder perched gracefully in the Nubra valley. It looked as an astounding beauty with influential contrasts of ivory snow and brown terrains. I was told that it is believed to be the oldest and largest Monastery of the Valley. Dwelled in the 14th century, it has bulks of magnificence and Tibetan style architecture which kept me speechless for a very long duration.

Sumit was suggested by a friend not to miss the morning prayer of the Gompa. So, we decided to be there before that time. Being a part of the prayer was truly fulfilling for our hearts and we felt calm and elated.

Likir Monastery
The best thing which keeps me glued to the place called Ladakh is the myriad of strange historical stories. Likir Monastery is known to be guarded by two serpent spirits, Nanda, and Taksako. Likir means surrounded by snakes and it truly holds good for the Monastery. It is built by 5th king of Ladakh, Lhachen Gyalpo and it belongs to the Gelugpa Sect. The Likir Monastery also hosts an annual festival which includes best cultural performance and religious rituals by Monks of the Monastery.

Lamayuru Monastery
Most of our tiredness flew away as we stood breathless in front of the Lamayuru Monastery. Located on a steep mountain, it is believed to be the “place of freedom” and thus gets the name, Tharpa Ling. Monks told us that once there used to be a crowd of 400 monks residing over here, but now most of them live in the nearby village and only 50 are left in the Monastery. There is an old associated fiction about the Monastery which says that the area once had a lake which dried up astonishingly and Naropa found a dead lion over there. Thus, it was decided to build the temple of Singhe Ghang(Lion Mound).

The intricate interior of the Monastery included classic murals and Thangkas. I was lost somewhere as I saw the idols of Buddha and scriptures around the Monastery. I don’t understand the reason behind my attraction towards Buddhism, but it is for sure. I felt elated as I was returning from Ladakh and reason was very obvious, “My dream was accomplished. I had lived my dream.”