Many of the birds, migrate from the warmer parts of India to spend the summer in Ladakh. Despite being an arid area, Ladakh may surprise you with the variety of birds, a total of 225 species have been recorded. Below are the names and pictures of the most common of these: 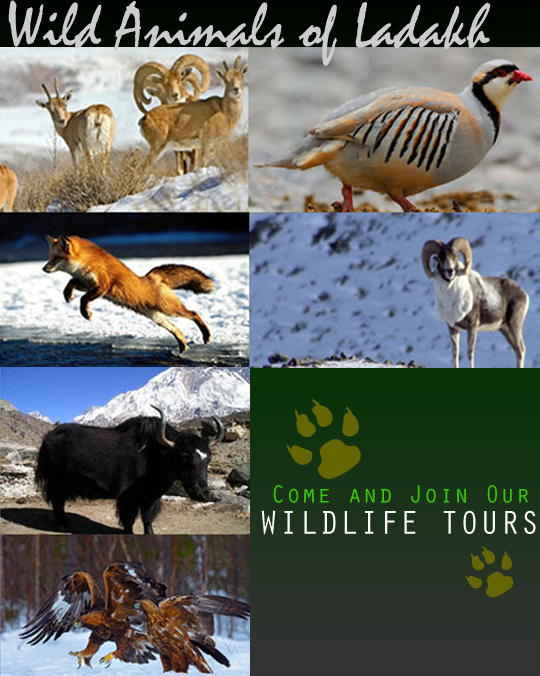 The Indian redstart, and Hoopoe, both summer in Ladakh and are very common. Surprisingly, the Brown-headed Gull is seen in summer on the Indus, and on some lakes of the Changthang. Other migratory water birds, include the Brahimini duck, Ruddy Sheldrake, and the Barhead goose.The Black Necked Crane is famous due to its extreme rarity. It is found only in Ladakh and Tibet. Other specifically high altitude birds are the Tibetan Raven, Red-Billed Chough, Snow-cock, and Chukor.

There are two main raptors in Ladakh. The Lammergeier, a vulture, is relatively common here. It’s unusual in that its head has feathers, unlike most vultures. The Golden Eagle, is also found in Ladakh, is closely related and outwardly the same as found in North America.

Being a cold, largely arid and dry region, only a handful of animals have managed to adapt to the punishing climate of Ladakh. There is however a possibility that you get to see the ones mentioned below:

The Ibex is found in high craggy terrain, it still numbers several thousand in Ladakh, and trekkers often spot them. The Bharal, or Blue Sheep, is even more common, ranging in the Himalayas from Ladakh east as far as Sikkim. Its unusual in that it is neither a true sheep nor true goat, but has characteristics of both. The Shapo, or Urial, is a goat, found at lower elevations, mostly in river valleys, and therefore is often  directly in competition with domesticated animals. They are now rare, numbering about one thousand. The Argali, or Nayan, is a relative of the Marco Polo Sheep of the Pamirs. They are impressive animals with huge horizontal curving horns. They are extremely rare in Ladakh, numbering only a couple hundred, however they do have a wide range throughout mountainous areas of the Chinese Provinces of Xinjiang, Qinghai, and Gansu. The Chiru, or Tibetan Antelope, (known in Ladakhi as Tsos) is also endangered. It has traditionally been hunted for its wool, which must be pulled out by hand, a process done after the animal is killed. The wool obtained from the Chiru is called Shahtoosh, and is valued in South Asia for its very light weight and warmth, but more than anything else, as a status symbol. Early in the 20th century the Chiru was seen in herds numbering in the thousands, surviving on remarkably sparse vegetation, they are sadly very rare now. The owning or trading in Shahtoosh is now illegal in most countries.

The Kyang, or Tibetan Wild Ass, is one animal that visitors can expect to see from the comfort of a vehicle, around the Morey Plains. They favour the rolling grasslands of this area, and with their natural curiosity makes them fairly easy to spot, despite the relatively low numbers, about 1500 individuals. They often seem to be drawn by their curiosity toward a jeep, or trekkers, only to be overcome with shyness and run away. The tendency to repeat this, a number of times is most endearing.

None of the predators of Ladakh are a safety concern to travellers; it is people who are a danger to these animals. The  Snow Leopard, is justifiably famous. It once ranged throughout the Himalaya, Tibet, and  as far  as the Sayan  mountains on the Mongolian, Russian border; and in elevation from  1800m to 5400m. They are extremely shy, and very hard to spot, and as such not well known, it is believed there are about 200 in Ladakh. While tourists are unlikely to see the cats themselves, during winter sightings of the footprints and other marks are not  uncommon. Tourists that want to see Snow Leopards should visit during the winter, as at this time the cats descend to lower altitudes, and are more active as prey is harder to find, befriending one of the biologists who come to Ladakh to study Snow Leopards would also help. Other cats in Ladakh are even rarer than the Snow leopard, if not as impressive, the Lynx, numbering only a few individuals, and the Pallas’s cat, who looks outwardly like a house cat.

The Tibetan Wolf is the greatest threat to the livestock of the Ladakhis and as such is the most persecuted, there are only about 300 wolves left in Ladakh. They look the same as Wolves seen in Europe and the Americas. There are also a few Brown Bears in the Suru valley and the area around Dras. They are not a threat to trekkers

Marmots are common; you can even sometimes see them from the road, although they don’t look different enough to the Marmots common to other mountainous areas of the world to be of much interest. You may book the local taxis for a day or more depending on the destination. If you are with family you can book a jeep or a car or even a taxi on per-person basis. Alternatively, those looking for an adventure may book motorcycles. Go2Ladakh offers services to book a lavish as well as budget stay and internal travel in the city. We ensure that we recommend the best of the hotels and cars for our patrons, so that they can enjoy a safe and comfortable trip.

Q1. What kind of wildlife can be found in Ladakh?

Q2. Which is the most commonly spotted animal in Ladakh?

Ans.Yak is the most commonly spotted animal in Ladakh.

Q3. How many wildlife sanctuaries are there in Ladakh?

Q4. How many national parks are there in Ladakh?

Ans.There is one national park in Ladakh- Hemis National Park.

Q5. Which is an offbeat place to witness wildlife in Ladakh?

Ans.Tso Moriri which is declared a Wetland Reserve is home to spectacular water birds like the endangered black-necked cranes and bar-headed goose.