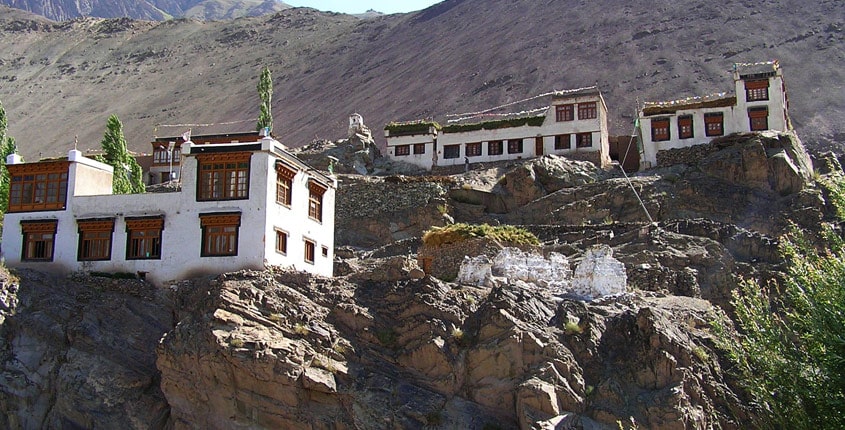 A tiny village 70 kilometers in the west of Leh, Alchi is known for its small 900-years old monastery called Alchi Monastery or Alchi Gompa. It was built between 958 and 1055 by a famous translator of that time known as Guru Rinchen Zangpo. Alchi is divided into four small hamlets that have developed civilizations on the south bank of the Indus River, which is considered as one of the four great rivers of India.

It was constructed as a part of former Tibetan King Yeshe Od of Guge’s mission to spread Buddhism in Ladakh, Himachal Pradesh, and Sikkim.

Shrines of the monastery

The monastery is huge and is divided into three shines -- the Sum Tsek, the Dukhang, and the Temple of Manjushri.

One of the most beautiful monuments of the monastery complex, the main purpose of building Sum Tsek is still unclear. It is three stories tall and constructed using natural stone and loam. The building has beautiful woodwork columns, walls, and facades, and clay paintings and images that were created by Kashmiri artists.

Dukhang is the monastery’s assembly hall and is used by the monks as a prayer room. The authorities have retained the original wooden door. You can see six different mandalas drawn on the walls as a tribute to Panch Tath?gatas.

The temple, also known as Jampe Lhakhang, was constructed in 1225 AD. Unfortunately, the temple isn’t well preserved but you can still see the original elaborately-decorated wooden door. Four Manjushri images are painted on four walls of the temple in bright orange color.

Other places to visit in Alchi

After you reach Leh, you can take a bus to Alchi. The first one leaves at 8 am and the last one returns from Alchi at 3 pm. You can also hire a taxi or two-wheelers to travel to the village. It is a tiny village but you can easily spend a day there visiting the monastery and different temples. Alchi Monastery is open from 8 am to 6 pm and the entry is free for all.