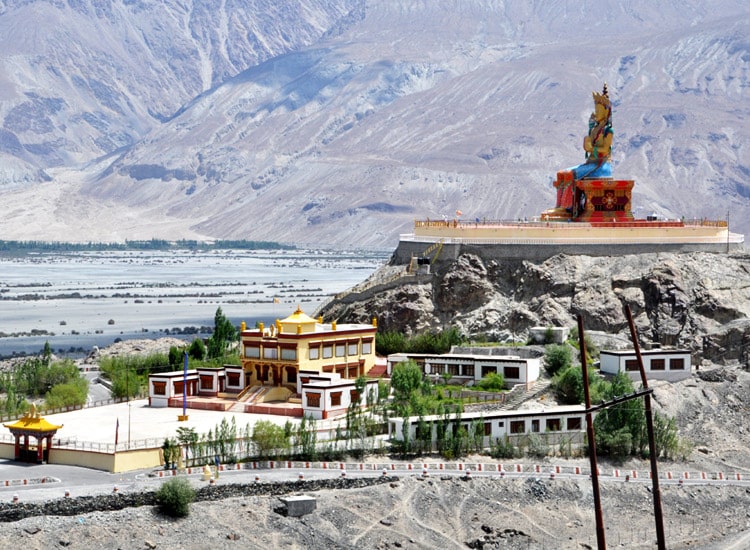 The oldest monastery in Nubra Valley, Ladakh, Diskit Monastery was built in the 14th century by Stod Jangem Sherab Zangpo, founder of Gelugpa and a disciple of Tsong Khapa. It belongs to the Gelugpa sect of Tibetan Buddhism. It was built during the rule of Nying Dakpa, the former king of Dumra or Nubra. Hundur Monastery and Lachung Temple are located very close to the monastery.

A big, colourful statue of Maitreya Buddha sits at the very top of the monastery, which is the monument’s main attraction. It took more than six years to complete. Dalai Lama, the holy high priest, inaugurated the statue on July 25, 2010.

In association with an NGO called Tibet Support Group, Diskit Monastery has opened a school for local Tibetan children, where they learn about information technology, the English language, and science. The monastery sits on top of a hill, at the very end of the approach road. Its two prayer halls are adorned with several pictures of guardian deities, ancient relics, and a big drum. The monastery also has a storage room, where the monks keep precious Tibetan and and Mongolian texts.

It is believed that an anti-Buddhist Mongol demon once lived in the monastery and was killed by Buddhist followers. His remains along with his wrinkled body part are hidden inside the monastery.

People from all over Ladakh visit Diskit Monastery for celebrating Desmochhey or the Festival of the Scapegoat. Hosted in February every year, Lamas of the monastery wear masks and perform the Cham dance, which keeps away ill-fortune and brings good luck to everyone. During this time, faces of the deities are covered with colourful cloth. After the festival ends, the Lamas through dough balls in different directions to shoo away bad luck.

When you are at the monastery, don’t forget to visit the Lachung temple. It is the one of the oldest temples of Nubra Valley and holds a big statue of Tsong Khapa wearing a yellow hat, which signifies the Gelugpa sect.

The fastest way to reach Diskit Monastery is by a car or a bus from Leh or Sumur via the Khardung La Pass. The best time to visit is between July to September or during the Desmochhey festival in February. It open on all days of the week from sunrise to sunset and charges entry fee of INR 30 per person. It is a small monastery, so you only need an hour to check out the monument.