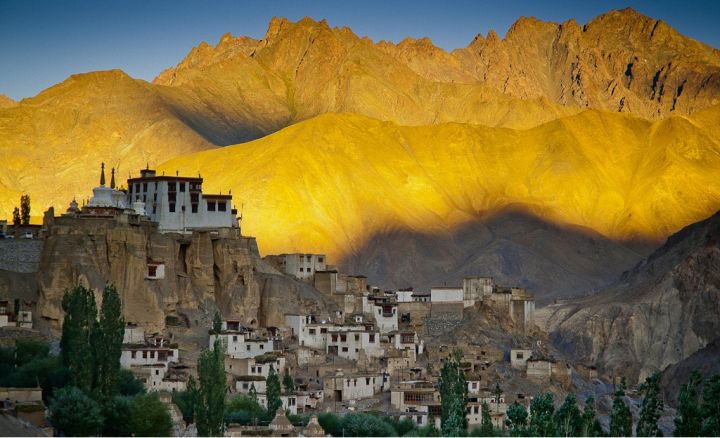 Around 11520 ft above sea level, Lamayuru monastery is one among the most admirable Tibetan Buddhist Monasteries that is located in Lamayouro, Leh. Popular as Tharpa Ling (the place of freedom), Yuru or Lamayuru is one of the oldest and largest monasteries in Ladakh.

The gompa is a home to almost 150 monks. Earlier, it was a collection of five huge buildings. However, only one of these structures survives now, which still covers a large area. Tourists of the monastery can enjoy scenic beauty of nature around and even the routine village life.

The History of Lamayuru Monastery

It is said that the Lamayuru’s valley was earlier a lake. In the 11th century, Naropa, a buddhist scholar, caused the lake to be emptied by making the surrounding hill split. When done, he found a dead lion that was covered by the lake waters. Naropa chose the spot to lay the foundation for the Lamayuru monastery with a temple named the Singhe Ghang—meaning, Lion Mound.

At first, what attracts tourists is a tall prayer flag pole. Apart from this, the main attraction at the monastery is the Dukhang, which can be found to the right of the courtyard. In 1970, the Dukhang got new column paintings as its revamp.

The entrance verandah of the gompa recently got painted with a colorful picture of the Guardians of the Four Directions. On the left wall, visitors or devotees can see a mural that depicts how a lama should live.

The Dukhang has a small cave on its right side, which is the Naropa’s cave because Naropa meditated there for several years. The cave is known for having an idol of Naropa and several idols of Marpa.

Things to do at Lamayuru Monastery

Lamayuru is famous and loved for Yuru Kabgyat. It is a local festival of two days that happens in the second month of the Tibetan calendar. The festival is also known as the mask festival due to traditional dance performances by masked dancers to depict Tibetan Buddhism’s essential teachings.

Lamas from Tibet, Korea, China, and Japan love to visit the village during the festival that incredibly adds to the monastery’s attractions.

In the 5th month of the Tibetan Lunar calendar, Lamayuru plays host to Hemis Tse Chu, which is Ladakh’s biggest monastic festival. This 2-day festival is dedicated to Tantric Buddhism’s founder Guru Padmasambhava. It aims at taming, turning and integrating Buddhist temples’ Bon-PO gods and demons as guardian divinities.

The best time to visit the gompa is from April to June.