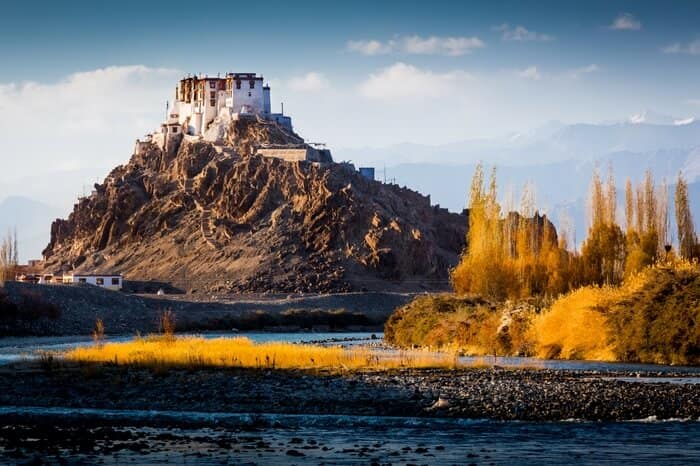 Visit These beautiful Monasteries In Ladakh during ladakh trip 2022

With a large Buddhist population and a vast history, Ladakh is an important Buddhist centre. There are several monasteries in Ladakh that don’t just help you find your inner peace and spirituality, but they are also architectural wonders. Most monasteries are situated atop high mountains and are unique in their own way of preaching and promoting the Buddhist culture. Several of these date back to the 11th century and house ancient Tibetan manuscripts, stupas, silver and gold statues, ancient thangkas as well as beautiful paintings.So if you’re planning a tour to Ladakh, don’t forget to visit these incredible monasteries while you are there to truly soak in the local experience.

Most popular monasteries in Ladakh

The most popular monasteries in Ladakh include Hemis, Thiksey, Alchi, Namgyal Tsemo, Stakna, Matho, Spituk, Shey, Diskit and Samstanling. Some of the monasteries also allow visitors to stay and have a first-hand experience of their ancient culture and traditions.

Built between 958 and 1055, Alchi Monastery is the oldest Buddhist learning centre in the Ladakh region.

The Spituk monastery built in the 11th century is popular for its music and dance festivals, as well as its proximity to Leh.One of the biggest and most famous monasteries in Ladakh is the Thiksey monastery, which now allows tourists to stay. There are rooms with basic amenities where you can stay, meditate, observe the monks, and research the culture at their well-stocked library.

The Hemis monastery is the oldest and richest monastery, which also allows tourists to stay and it truly comes to life during the annual Hemis festival.

To cover all the monasteries in Ladakh, it is best to plan a 10-day trip or book a 10-day Ladakh tour package.

Ladakh monastery tour on a bike

A Ladakh tour with a bike is an unparalleled experience that you definitely shouldn’t miss out.Riding your bike through the treacherous and unpaved roads, steep curves, high terrains and erratic weathers is totally worth it as you will catch a glimpse of some of the most surreal views in India. In fact, touring the monasteries and valleys of Ladakh on a bike is the ultimate stairway to heaven. For an ideal Ladakh tour with a bike, it is recommended to plan a trip or book a tour package spanning 10 days or more, as you’ll need adequate rest and time to acclimatize to the high altitudes. Depending on your budget and requirements, you could either get your own bike or rent one.

Best time to visit the monasteries in Ladakh

The ideal time to visit these monasteries in Ladakh is during their festivals, based on the Tibetan calendar, as the monks celebrate each festival with sacred dances, rituals, and feasts. Locals as well tourists take part in these celebrations with great enthusiasm. Though, the monasteries look just as beautiful during other days of the year.

If you’re planning on going on a bike tour of Ladakh, then the best time is from mid-May to October.

Located 45 kilometers from Leh, Hemis Monastery is a Himalayan Buddhist monastery belonging to the Drukpa Lineage. The monastery was constructed du...

A tiny village 70 kilometers in the west of Leh, Alchi is known for its small 900-years old monastery called Alchi Monastery or Alchi Gompa. It was...

Thiksey Monastery is a 15th century monument belonging to the Gelug sect of Tibetan Buddhism. It looks very similar to the Potala Palace in Lhasa, ...

The oldest monastery in Nubra Valley, Ladakh, Diskit Monastery was built in the 14th century by Stod Jangem Sherab Zangpo, founder of Gelugpa and a...

Built in the 11th century by Lha Lama Changchub-od?s elder brother, Od-de, Spituk is one of the most arresting monasteries in Leh district, Ladakh....

Lamayuru monastery is one among the most admirable Tibetan Buddhist Monasteries that is located in Lamayouro, Leh. Popular as Tharpa Ling (the plac...

Shey Palace was built in 1665 by Deldan Namgyal, the former king of Ladakh, as his summer retreat. It was destroyed along with Shey Monastery durin...

Matho Monastery is located at a distance of 26 km from Leh city. It is believed that this monastery was built in 1410 by Lama Dugpa Dorje, alongsid...

Stakna Monastery is a beautiful architecture settled in the space of Mother Nature. Located at a distance of 25 Km from Leh, this is one of the pop...

Basgo monastery is amongst few of those monasteries which are indexed within the list of global endangered historical sites by us world monument fu...

One of the magnificent monasteries within the Ladakh vicinity, Phyang Monastery belongs to the red Hat phase of Buddhism. It's far perched on a hil...