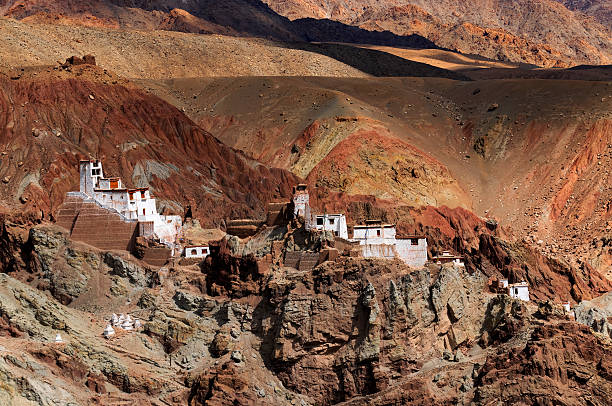 Ladakh, ‘Land of High Mountain Passes’ narrates the whole experiences and adventure one can have during a road trip. The secret ways of the mountains connect a region to region uncovering the richness of the Ladakh region with the outside world. Welcoming an increasing number of visitors every year the roads in and out cutting the barren mountain ranges give an awe-inspiring view of the landscape.  The passes in Ladakh have its own importance and on top of the passes, you will see prayer flags all around fluttering high in the air and a small shrine to seek the blessing. The experience will be at its best while crossing the high passes. 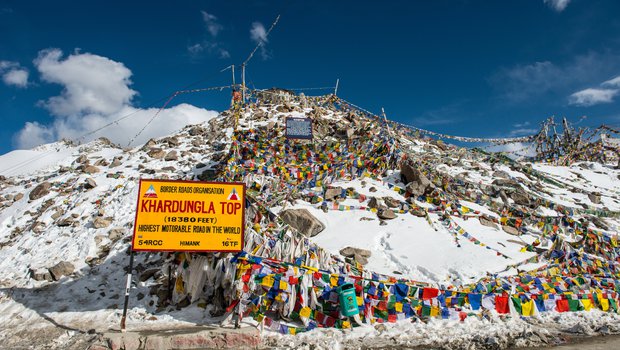 KHARDUNG LA (Khardung Pass, la means pass in Tibetan) at 5,359 m (17,582 ft) elevation is a high mountain pass located in Ladakh region of the Indian state of Jammu and Kashmir. The local pronunciation is "Khardong La" or "Khardzong La," but, as with most names in Ladakh, the romanised spelling varies. The pass on the Ladakh Range lies north of Leh and is the gateway to the Siachen Glacier lies partway up the latter valley. Built in 1976, it was opened to motor vehicles in 1988 and has since seen many automobile, motorbike and mountain biking expeditions. Maintained by the Border Roads Organization, the pass is strategically important to India as it is used to carry supplies to the Siachen Glacier. Khardung La is historically important as it lies on the major caravan route from Leh to Kashgar in Chinese Central Asia about 10,000 horses and camels used to take the route annually, and a small population of Bactrian camels can still be seen at Hundar, in the area north of the pass. During World War II there was an attempt to transfer war material to China through this route. 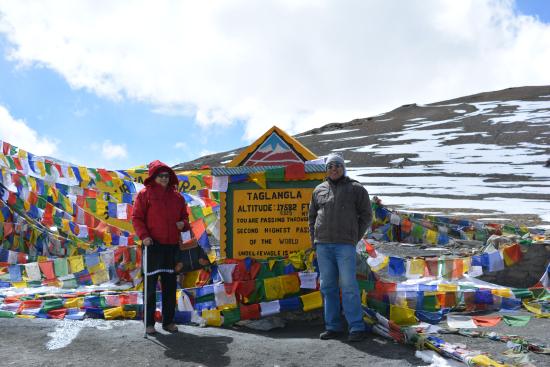 Taglang pass is the second highest mountain road with an elevation of 5,328 metre high. Traversed by the Leh-Manali Highway, the rugged mountains, unpaved roads, harsh weather, and altitude definitely make the drives challenging but the pass gives a spectacular, breathtaking view of the serene landscapes. When reached on top of the pass the prayer flags all around add more charm and the small temple for positivity and safe journey.

After crossing the Taglangla pass, the nearest settlement or a stopover on the route to Manali for a cup of tea is Pang settlement area which is located after crossing the vast plain known as Kyamchuthang. Cold weather and unpaved roads will be challenging but exciting for the one who seeks adventure.

Precaution
The road is seasonal and remains closed during the winters because of heavy snowfall.
Prepare yourself as there is low oxygen level and altitude sickness.
Warm clothing

Changla pass, world third highest mountain pass is must cross to reach Changthang region and the famous tourist destination area Pangong Lake.    It is believed that the pass is named after an ascetic, ‘Sadhu Changla Baba’ and the temple in his name is established on the top.  Grab a tea, coffee or snacks and enjoy with at the greatest height in a cafeteria named ‘Changla cafeteria’ at the top. Rough terrain, harsh climate and unpaved road is definitely a challenge but a drive exploring nature makes the trip worth it.
While coming from Leh the stopover before reaching the pass is Kharu after which Sakti village is the nearest settlement to the pass. On the other side, Tangtse village is the nearest settlement.

Precaution
The road remains open throughout the year but remains closed for days pertaining to heavy snowfall in winters
Thin air may cause certain problems such as breathlessness, headaches and other complications. It is advisable to carry a medical kit and oxygen cylinders
Warm clothing 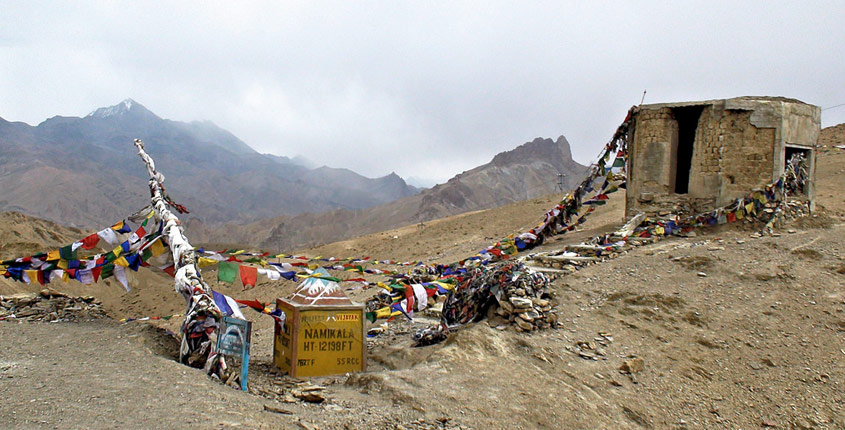 Namkila pass in the Zanskar range means a pillar of the sky. The pass is on the way to Mulbekh valley which is known for the 9 metre tall rock carved Maitreya Buddha locally known as 'Mulbekh Chamba’. It is one of the important pass between the twin district, Leh and Kargil of Ladakh region.  The barren landscape, clear blue skies with floating white clouds and a prayer flag fluttering on the top of the pass gives a spectacular view. The paved road makes the drive smooth, thus letting the road trip more enjoyable.
The road remains open throughout the year.

Precaution
Advisable to avoid travelling in winters
High altitude problem can persist it is advisable to have a medical kit and oxygen cylinder along. 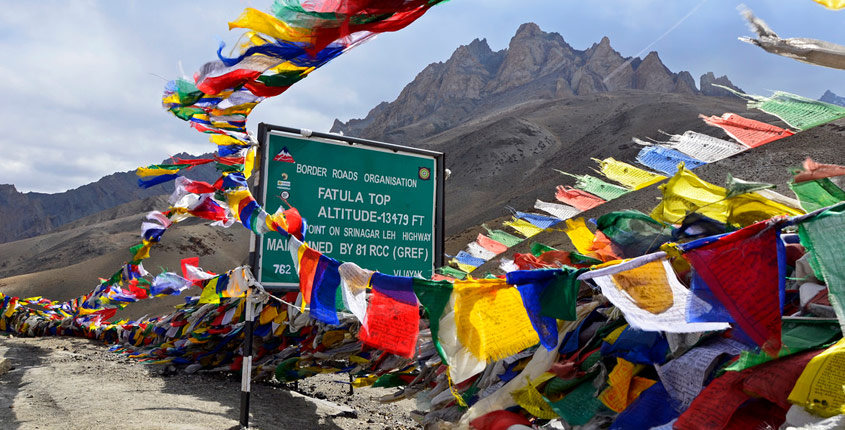 Fotula pass also on the Zanskar range is one of the highest pass between Leh and Kargil. The pass offers a breathing view of snow-covered peaks of Zanskar range and also a mesmerizing glimpse of Lamayuru monastery. At the top of the pass, Prasar Bharati relay station is also situated providing its service to the Lamayuru village and nearby settlements.

Precaution
As compared to other passes altitude, the pass is much pleasant but better to keep altitude sickness medicine handy.
Small oxygen cylinder in case of high altitude problem