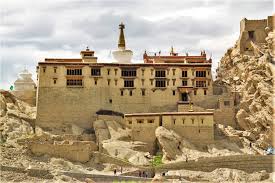 Sitting atop a serene hill, Shey Palace was built in 1665 by Deldan Namgyal, the former king of Ladakh, as his summer retreat. It was destroyed along with Shey Monastery during the 1842 invasion of Dogras of Jammu, which forced the people living there to abandon their residence and move to the nearby Shey village.

Shey translates in mirror in Ladakhi, so Shey Palace means the palace of mirrors. It was intentionally constructed overlooking the heartland of upper Central Ladakh. The three storey building has become a popular tourist attraction as it is retained in the way Namgyal built it five centuries ago.

Discovering the culture and beauty of Shey Palace

The Shey Palace is famous for its two-storey Shakyamuni Buddha statue, which is covered in gold and copper. Du-Khang, the palace’s assembly hall, is full of Tibetan mural paintings depicting the life of Gautam Buddha. Make sure you take a look at the rook-face engraving of the five Buddhas at the very base of the 17th century monument.

Shey Monastery holds two festivals every year, one of which is hosted at the palace. It is called Shey Doo Lhoo and is celebrated on 26th and 27th of the first month of the Tibetan calendar, which marks beginning of the sowing season. It falls during July or August of the Gregorian Calendar that we use today. During the festivals, the monks perform several rituals. People from nearby villages visit the palace and offer their prayers.

After the ceremony is over, an oracle rider rides a horse from the palace to the monastery to perform an uninterrupted three-day long prayer. He goes into a trance and gives prophecies for the New Year. Pick up a few souvenirs for your friends and family from the Souvenir Stall that sells t-shirts, mugs, watches, and caps.

You will have to contact the top Lama before visiting the palace since it isn’t open to all as it is an important monument to the Buddhist faith. When you visit Shey Palace, make sure you visit Shey Monastery as well since they are both in the same complex. It is open on all days of the week from 7 am to 8 pm and doesn’t charge any entry fees. You will have to hire a cab to reach Shey Palace from Leh, which is only 15 kilometres away. Don’t miss the chance to grab lunch at one of the tiny Dhabas of Shey village that offer delicious Tibetan cuisine.