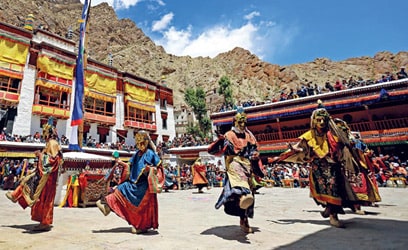 The picturesque monasteries of Ladakh stand tall on a hilltop showcasing the rich incredible cultural and spiritual heritage. The well preserved ancient monasteries with beautiful architecture, wood carvings, old valuable manuscripts, the gold, silver and bronze icons, stupas, Thanka and wall paintings will take you to a new journey and bring inner peace.

According to the Tibetan lunar calendar, many monasteries in Ladakh celebrate annual festival. Among all these religious festival, the annual festival of Hemis monastery known as ‘Hemis Festival’ or ‘Hemis Tsechu’ attracts people from different corners of the world. Religious rituals, sacred mask dance are performed for peace, prosperity, and welfare of all sentient beings.

Hemis monastery located 43 km southwest of Leh is one of the most famous monasteries of Ladakh. The monastery was founded by the great yogi ‘Staktsang Raspa’ and King ‘Singey Namgyal’. In 1730, Gyalsras Rinpoche initiated the famous Tsechu festival at Hemis and since then, Hemis festival is celebrated every year.

Hemis festival is observed on the 10th and 11th days of the 5th month of the Tibetan lunar calendar (June or July) every year. The celebration of Hemis festival in the Tibetan Monkey year which falls once after every 12 years is considered auspicious during which the spectacular 4 storey high Thanka painting of  Guru Padmasambhava is exhibited outside the courtyard of the monastery for few hours. 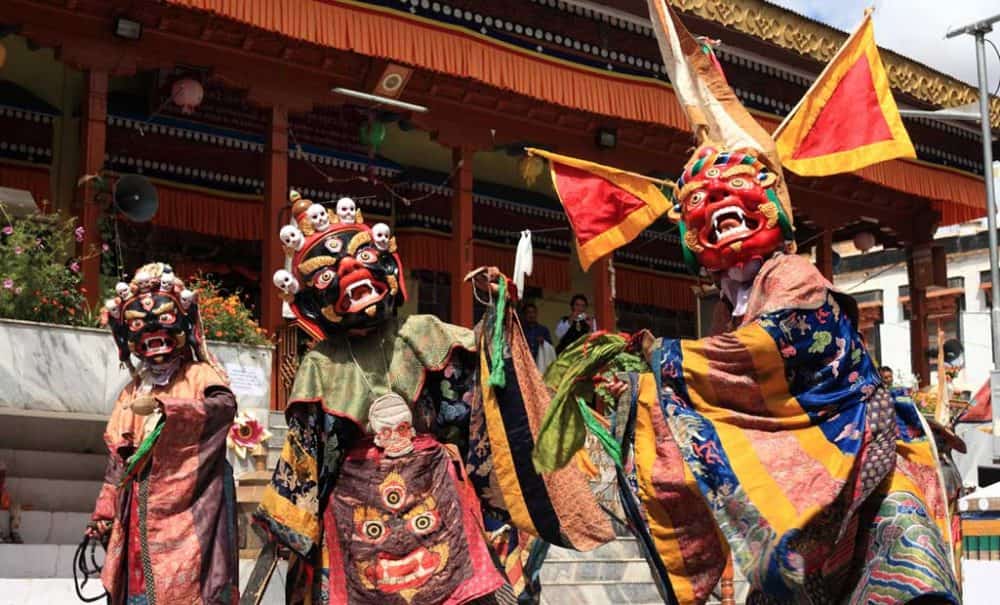 Hemis Festival Highlights
On the 9th lunar day, the monastery is decorated and final rehearsal of mask dance for next day is carried out.

On the 10th lunar day ‘Tsechu’ the festival begins with early morning rituals on the roof of the monastery with the sound of trumpets, drums, and cymbal. The portrait of Gyalsras Rinpoche is unrolled for display. Around 10 AM, the sacred ritual mask dance starts which includes:

1.      The Thirteen Black Hat Dancers: Thirteen monks dressed in a tantric way represents the master of Tantric with supernatural power who drives out evil and negative influences turning the land into a positive one.

2.      Consecration:  Sixteen monks wearing a copper gilded mask carrying a small hand drum and bell perform the Dakini dance. They purify and bring down blessings to the land.

The eight principle forms of Guru Padmasambhava are:

4.      The twelve Zhing Kyong:  They are the protectors of truth. The main figure is the couple Zhing Kyong ‘Yab Yum’ male and female with lion faces.

5.      Serkyem: Beverage offering is performed by the main teacher ‘Lobpon’ of Hemis.

6.      The four Goma (Gate Keepers):  They work for the welfare of sentient beings.  The first one holds a hook that catches evil spirits, the second one with rope binds them, third with an iron chain, ties them and the fourth one ringing the bell drives them mad so that they cannot escape in any direction.

7.      The four lords of the Graveyards: The mask represents human skulls and attired like a skeleton. The dance depicts the celebration of the victory of good over evils.

8.      The five Chemchog Heruka: It is a fierce form of Guru Padmasambhava. Four Heruka is coloured red and the fifth one is dark brown.  Evils are eliminated by wrathful means, liberating their minds and sending them to a pure land.

9.      The Five Tshoglen:  In a wrathful form, the first one is in red color, second in white, third in yellow, fourth in red and fifth in green.

10.  The ten great Ging: In a wrathful form, a warrior flag on the head, tiger skin covering the lower part of the body, the dance drives away spirits and energies that can harm the dharma and sentient beings.

With this, the thanka is rolled back thus marking the end of the first day of  Hemis festival

The 11th Lunar day is the last day celebration of Hemis festivals. Followed with the same rituals as the previous day, the mask dances performed are:

2.      Worship of Gyalpo Pehar (Dharmapala):  Gyalpo Pehar is the protector of Hemis. The monk assembles in the main temple and worships Gyalpo Pehar.

3.      The Eleven Acharyas:  The eleven acharyas, followers of Gyalpo Pehar holding a Vajra and mirror performs the dance.

4.      Maning: Maning are the protector Mahakala. The yellow, white and red maning along with four formations of the Gyalpo followers perform the sacred dance.

5.      Serkyem: Beverage offering is performed by the two main teachers of Hemis and Chemdey along with two dance masters.

6.      Mahe Dongcham: It is a buffalo face mask dance led by a wisdom deity. It destroys an effigy which represents those who committed ten most destructive crimes.


With this, the famous Hemis Festival celebrating Guru Padmasambhava or Guru Rinpoche ends. It is believed that whoever attends Hemis festival acquires merit, brings positivity and eliminates misfortune.