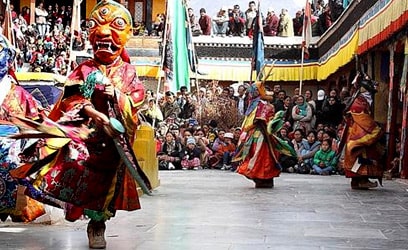 All you want to know about Thiksey & Spituk Gustor Festival

The more you drive through the highest passes in Ladakh, the more you become the fond of its natural beauty. And you will be equally attracted to its vibrant culture. Being more specific, you will love to join the festivals that locals celebrate here. Your trip to Ladakh will be incomplete until you join one of the local festivals.

Celebrated in the month of October/November, this festival is celebrated for two days. The colourful dresses, vibrant rituals, and enthusiastic dance performances bring unmatched joyful moments for the locals and tourists.

The festival is celebrated mainly in the regions of Thiksey, Spituk, and Karsha regions of Leh Ladakh. The festival marks the victory of Good over evil and drives off the evil souls from the region. The dance performances showcase the symbolic assassination of the evil souls. The dance performers wear elaborative masks in order to look aggressive and they represent the shadow of Gods and Goddesses.

How is it celebrated?

Monks offer early morning prayers during this festival and a special ceremony event called ‘Argham’ or ‘Killing’ is performed. A leader among the mask-wearing dancers cut or destroys the cake or Torma. The leader then distributes the cake and marks the end of the festival and represents the victory of Good over Bad.

The entire story of “Argham” depicts the symbolic assassination of evil and traitor King Lang Darma of Tibet by A Buddhist monk which has truly happened during the mid of 9th century. The festival is quite similar to the Hindu Festival – Dussehra.

Though the time of the festival is not fixed it is usually celebrated during the nippy months of October or November.

So next time you plan for a trip to Ladakh, you can spare your time for joining this festival.