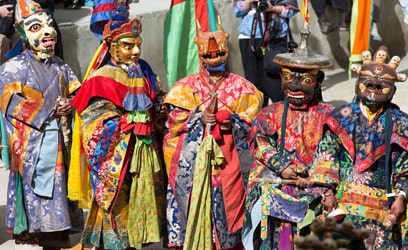 The two-day long festival is celebrated with full enthusiasm at Lamayuru, 127 km from Leh. A large number of people from abroad come to witness this tremendous festival. Buddhist people come from different countries like Japan, China, Ti bet, and Korea to attend the festival of harmony at Leh. It is a festival celebrated to bring happiness and drive off evil spirits among people.

Why is it celebrated?

Mask dances are the very usual forms of entertainment in all Buddhist festivals and especially the Mahayana tradition which still persists in Bhutan. As a never-apart part of the Buddhist holy scripts, Mask dance was first performed back in the 8th century. The monks cast a beautiful spell by participating in the dance performances at Lahul, Spiti, Ladakh, and Kinnaur. The masked dance drama is performed to appease the deity. Another objective is to drive off all the evil spirits from the place and protect the people. It also ensures the health and hygiene of the people.

Description of the Yuru Kabgyat

The Yuru Kabgyat festival dance consists of Chhams in which Lamas offer dance performances round and round with attractive colourful masks. The circular movements are coupled with drum beats, long pipes, and cymbals. The masks are made of paper-mache and a thin coat of plaster makes them solid in form.

There are two main figures; one is Yama or the Lord of Death and another is known as God of Wealth. The God of wealth is also regarded as the protector of human and animals.

Time for the celebration of Yuru Kabgyat: