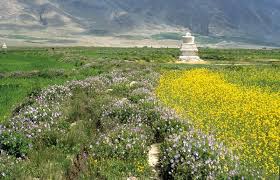 On this trek you will visit several villages which are among the richest in Ladakh. This trekking is also known as Sham valley or Apricot valley trek. At the start you will visit Likir monastery (optional), where the trail to Likir monastery meets in between Saspol – Basgo, it is hardly an hour walks from the road. Through the Indus valley and the ancient kingdom of Sham, we will discover the main Ladakhi monasteries and the wonderful sites surrounding them: Lamayuru and Alchi are all accessible